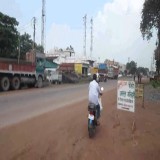 Abhanpur is a Town in Abhanpur Tehsil in Raipur District of Chattisgarh State, India. It is found 28 KM towards South from District head quarters Raipur. It is a Tehsil head quarter.

Abhanpur Pin code is 493661 and postal head office is Abhanpur .

Gobranawapara , Raipur , Birgaon , Mahasamund are the adjacent Cities to Abhanpur.

This Place is in the outskirt of the Raipur District and Durg District. Durg District Patan is west towards this place .nd during the 1990s made overwhelming gear inaccessible for use.