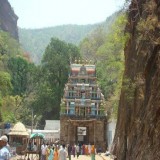 Allagadda is a Town in Allagadda Mandal in Kurnool District of Andhra Pradesh State, India. It has a place with Rayalaseema district . It is found 105 KM towards South from District head quarters Kurnool. It is a Mandal head quarter.

This Place is in the fringe of the Kurnool District and Cuddapah District.