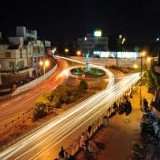 Rajkot is the 4th biggest city in the region of Gujarat, India, after Ahmedabad, Surat and Vadodara. Rajkot is the point of convergence of the Saurashtra territory of Gujarat. Rajkot is the 35th-biggest urban agglomeration in India, with a populace more than 1.2 million as of 2015.Rajkot is the eighteenth-cleanest city of India, and is the 22nd-quickest developing city in the world.The city contains the authoritative central command of the Rajkot District, 245 km from the state capital Gandhinagar, and is situated on the banks of the Aji and Nyari waterways. Rajkot was the capital of the Saurashtra State from 15 April 1948 to 31 Oct 1956, preceding its merger with Bombay State on 1 Nov 1956.